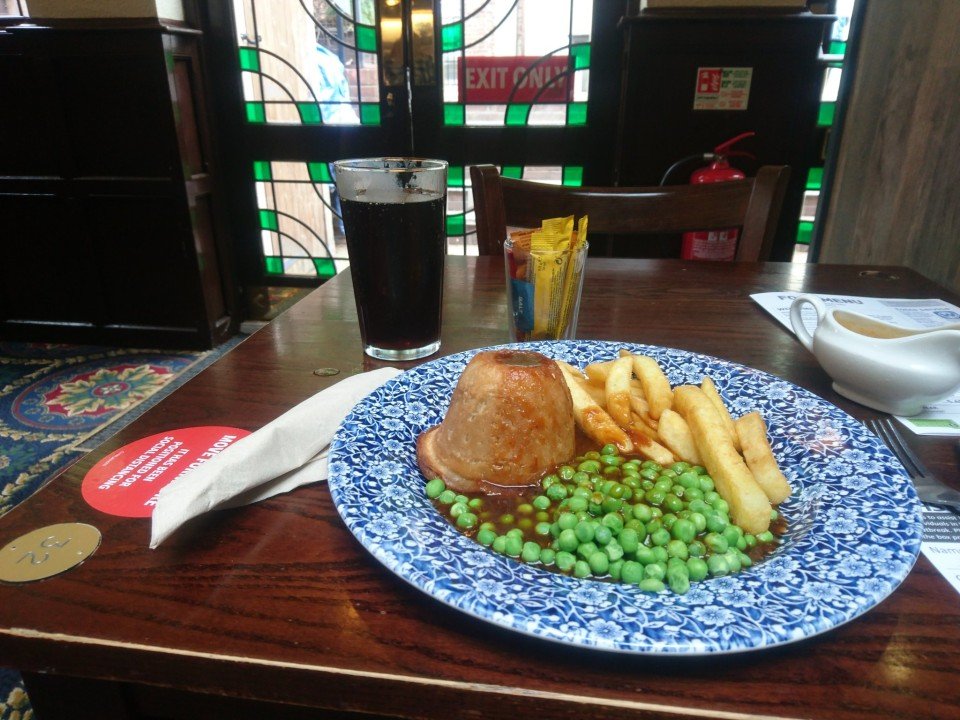 As England starts to open itself back up post-lockdown, you might be one of the 100,000 people who took time out of your well earned weekend to like a photo of some chips and peas. It seems an odd thing to do, given that life is short and the recent tragedy has caused tens of thousands of untimely deaths, but as I speak, another 15,000 people have joined the trend, begging the question – what on earth is going on?

On the other hand, you might be one of the 14,000 people (practically niche in comparison) who have taken a few seconds of their existence to like a photo of Chris and Jimmy, two Manchester residents who decided to follow Boris’ advice and do their public duty this weekend. Two Carlings were dutifully ordered.

Separate to the bizarre speed with which the government want us to forget Coronavirus ever existed, what has lain beneath a lot of the social-media commentary from those of us who did not rush to the nearest alehouse this weekend, has been the latest instalment of some good, old-fashioned poor shaming. True, we have been treated to some widely shared and derided content of a jam packed Soho, and some frankly astounding news articles reporting the fact that drunk people do not socially distance. In other news, the sky is blue.

But exactly why Rebecca Day, senior news reporter for the MEN and bringer of such quality content to the Manchester press as the fact that Jimmy hadn’t gone to bed before visiting the pub, wants us to focus on this, is a matter that I believe deserves some thought. Jimmy, she tells us, has just finished his nightshift tarmacking roads, and described his first taste of the big C as being, ‘like an angel pissing on the tip of his tongue.’ It’s hard to know how anyone in Manchester was able to sleep at night, being deprived of this quality information. It’s worth noting as well, because it’s significant, that the quote was framed this way in the tweet, with quotations surrounding the use of the term ‘his’, casting reasonable doubt on how much of a direct quote this even is.

The fact that Day, or perhaps her editor, chose this particular pub to focus their editorial on, says a lot, and perhaps the focus of this tweet instead highlights the fact that their previous assumptions about the behaviour of the pub’s clientele didn’t come to pass. Instead, resorting to a focus on Jimmy’s day job and choice of vernacular seems a thinly disguised way for the MEN to generate quality social media content on the back off the well-established trope of class shaming.

Back to the chips and peas. Twitter user Jamie Clarke didn’t know what he was letting himself in for when he proudly posted his Sunday lunch, courtesy of Weatherspoons. Within hours, a re-tweet of his photo had gone viral, with the user demanding to know, ‘this is what you left your house for?’ Following the well trodden path of many viral tweeters, the user then decided to plug her own artwork.

These tweets intersect with a wider societal issue regarding the visibility of class and our propensity to use it to further our own self-image. Being, as it is, invisible – compared to, say, race or sex, class is easy to weaponise both for and against a cause as the user sees fit. Of course, class is invisible precisely because of the fact that it is not real, but instead an entrenched ideology which results from a system of gradated inequality. As such, there has been a notable rise in people claiming the working-class identity, usually whilst virtue-signaling on social media, which is completely impossible to quantify or to prove. Alistair Wilkinson of the Old Vic called this out early into the lockdown process, when people who had formerly claimed working-class identity were exposed through Zoom calls as living in huge houses and, in one case, having their own pool.

As a general rule, if you’re wondering whether you’re working-class, you’re probably not working-class. This is a title no one wants to be given. Middle-class guilt, however, seizes on the flexibility of the term to reflect: I once had a job, I’m not as rich as that person. I must therefore be working-class. Or, my parents worked really hard when I was a child. Being working-class is much more than this, and one of the strongest factors in its makeup, for me, is the lack of choice, which means that morals as commodity have no place in daily life. We may all score points for despising the ethics of Primark’s production lines or the political bravado of Weatherspoon’s Tim Martin. But when it’s a choice between cheap or nowt, ethics will always go in the bin. People who have choice can not comprehend the way a lack of choice affects the body, mind and spirit. To be without, is to lack agency. It is little wonder that the shops with some of the biggest queues recently have been budget stores such as Sports Direct, Primark and Lidl. But whilst there was a storm of anger over poor-shaming single mothers outside Primark, working-class men enjoying a pint seems to be fair pickings.

As such, I find the choice of the MEN to focus on a visibly working-men’s pub, highlighting both the poorly-paid profession, the inhuman night shift and the propensity for bad language as elements by which other users can feel superior, deeply troubling. Even those from a working-class background were liking the tweet: no one wants to identify with the bottom. What isn’t explored, is the fact that drinking at this time in the day may be the only option for an employee working night shifts, and that he’s very likely to have been tarmacking the same roads that your Uber will use, to pick you up from a posh wine bar later tonight.

The same can be said of the chips and peas. The supposed quality of the food doesn’t represent anything about the user other than the fact that this may be the only choice he is presented with, to meet his social and economic needs. Going to the pub to watch football shouldn’t be looked down on, when the price of subscribing to those same entertainment packages at home is through the roof. Similarly, why we are focussing on the fact that working-men want to visit their friends in the local, rather than, say, literally anybody else, says more about this country’s distaste of the working-man who so often builds the infrastructure we rely on to live our lives. The working-class man is lesser, dirty, lusty and uncultured. He is an embarrassment we can laugh at from a distance, rather than trying to understand. The working-man is our cultural arbiter; by accepting his position as lowest, we measure our comparative achievements against him.

I want to end by acknowledging the fact that images of Soho revellers have also been doing the rounds, so this is by no means a singular issue. I accept this, and accept the contradiction of the fact that, inevitably, a lot of people who will have snuck out for an altogether more sophisticated evening last night will also be the same people condemning this behaviour. ‘This is bad and very selfish, we didn’t do anything like that when we were having our meal in a glass box, served by a struggling student in PPE. But this behaviour is reprehensible!’

The fact is, I’m not concerned with the behaviour of yuppies who want to go and get drunk, who are inevitably meeting up with people they’ve probably Facetimed every couple of days, who they’re in regular contact with, spending money that is clearly available for entertainment spending. I’m more concerned with the demonisation of men who, more likely than not, have less financial and cultural access to Zoom and for whom a visit to the pub is a break from an otherwise tough existence. Splashing out in Soho seems additionally shitty whilst so many people are in imminent danger of losing their jobs, so why we’re focussing instead on folk who may only have a few pints in their wallet says a lot about the focus of our obsessions. Is it, perhaps, because you’re closer to the former than the latter? I’d love to see some of the people condemning these men complete a night shift, or survive a week on minimum wage, and then turn down a Weatherspoons lunch and a pint of Carling. Morals might be much harder to come by then.

History belongs to the present, not just the past.

Want free drinks and discounts? Sign up to our newsletter today!
Sign Me Up! Opens in a new tab
×
Not a member?
Sign up
Already a member?
Sign in
Back to
Login
×
Close Panel

Item added to your cart

Continue Shopping Go To The Cart